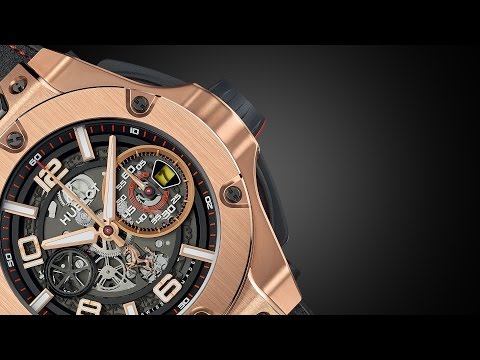 Since 2011, the association of Hublot and Ferrari offers us exceptional limited editions. This year will not escape the rule with the new Big Bang Ferrari, a Big Bang Unico model inspired by LaFerrari design.

These three advantages correspond perfectly to our two leading brands, and therefore naturally to the new model Big Bang Ferrari. It takes the forms, colors and elements of the latest Ferrari supercars, from their aesthetics to their performance.

Visually, the Big Bang Ferrari takes again the forms of the tachometer Ferrari with its minutes counter located at 3 o'clock but also by the display of the date which reminds us very clearly the speed selectors. At 6 o'clock, the famous Ferrari emblem is revealed, and at 9 o'clock the seconds counter takes again the forms of the vents. For this limited edition, the hands of hours and minutes have undergone a total makeover and are made more legible, as well as the figures that no longer appear horizontally. 3D effect guaranteed!

LaFerrari shapes can also be found in the box of the Big Bang Ferrari with its tapered and functional lines, almost aerodynamic. The bezel displays new contours and cuts, as for the steering wheel of vehicles of the Italian brand.

Finally on the crown of the Big Bang Ferrari one sees very clearly the red band present on the back of the LaFerrari, difficult to do more faithful homage! The watch continues in its push buttons in the shape of car pedals, but the brand imposes its identity through the logo Hublot located on the crown. Other reminders include the crown guard in the shape of the TPE on the dashboards or the reverse profile in the same design as the Ferrari vehicles. 7 letters that appear proudly in flamboyant red.

The Big Bang Ferrari is as powerful as the Ferrari vehicles in particular thanks to its powerful Unico engine allowing a power reserve of approximately 72h. It incorporates a FlyBack chronograph movement on the dial side whose oscillating masses resume the appearance of Ferrari star rims. The movement is revealed through a sapphire dial and dial, all mounted on a Alcantara leather strap, the same as Ferrari uses for its cockpits, embellished with the same red stitching, or black Schedoni leather, like the seats visually Perfect sports cars.

To stick to his four-wheeled counterpart, the Big Bang Ferrari had to be as rare as this one. Indeed, you will find only 1000 copies in titanium, 500 in King Gold, and finally 500 in carbon.

In order to access this site page, please login.

Please complete the fields below.

You're almost there ! Only a few details to fill in !

You're almost there ! Only a few details to fill in !

Skip this step Save